History of The Danish Pipe Shop 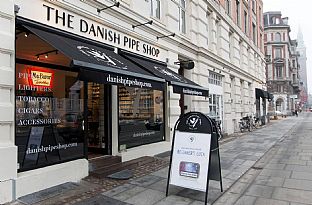 The Danish Pipe Shop is one of the few 100% pipes and tobacco shops in Europe. The shop was bought from Poul Hansen in 1969 by Steffen Nielsen (1939-2011) and is today managed by the family of Mr. Nielsen and owned by his son Nikolaj and the daughter of Mr. Nielsen, Louise. In 2014 world famous Danish pipe maker Tom Eltang bought 20% of the shop.

We estimate that we since 1969 have delivered about 500.000 pipes in all price ranges to satisfied customers. For many years our shop was/is the home for pipe maker pipes like Poul Ilsted, Vigen, Tao, Bjarne Pipes, Tom Eltang, Winsløw, Neerup and Nørding. It has always been important for Mr. Nielsen to support the small pipemakers and their freehand/handmade pipes and we try to keep his philosophy alive today.

One of the strengths of our shop is that we always have a wide range of pipes in the price range 20 to 10.000 Euro (today prices). We aim to please everybody’s need and respect that people have very different relationships with their pipes.
The shop always has more than 5000 pipes on stock and is well known for having hundreds of different pipe tobaccos to choose from. For many years The Danish Pipe Shop was located on the famous pedestrian street "Strøget" in the center of Copenhagen, Denmark and is therefore world famous due to international customers, tourists and our presence since 1969.

In 2011 it was decided to extend our relationship with both domestic and international customers with a web shop offering a wide range of our products.

In 2013 we were announced to be the dealer of the year by My Own Blend. The diploma was given because of our sales that were the highest in Denmark, and the extraordinary support The Danish Pipe Shop has given My Own Blend. In October 2013 the leading Danish pipe magazine had a three page article about the shop.

In 2014 world famous Danish pipe maker Tom Eltang bought 20% of the shares of the company. Tom’s presence on the board strengthen the knowhow of the company in general - plus it was decided that The Danish Pipe Shop would be his “Flagship Store”.

In March 2015 our CEO and the son of founder Steffen Nielsen, Nikolaj Nielsen was awarded the title of “Pipe Man of the year 2015” in Denmark for his work with the shop and tireless promotion of pipes and tobacco. Former award winners have been politicians, actors, pop stars, celebrities, and friends of ours Eltang and Former, so he joined a fine group of people.

In the beginning of 2016 The Danish Pipe Shop was awarded the prestigious Gazelle award by the Danish newspaper Børsen. This price celebrates companies that perform financially well.

In April 2016 it was announced that The Danish Pipe Shop would move to new location 400 meters from the old shop. The main reason for moving was simply that more space was needed. We felt that we had outgrown the good old shop and we needed more room for stock, packing area etc. Moreover the new shop has a small lounge where you can sit and relax.

In summer 2016 it was decided that The Danish Pipes Shop would expand their business by becoming Danish distributor of pipe tobaccos from Dunhill and Peterson.

The new shop opened on October 1st 2016 with around 500 people joining the celebrations of the new and bigger Danish Pipe Shop.  A short documentary about the move was produced and can be watched here.

In May 2017 The Danish Pipe Shop became official distributor of 4th Generation Pipe Tobaccos in Denmark.

After more than a year’s work The Danish Pipe Shop opened their new webshop (the current website) in July 2017.

In 2020 The Danish Pipe Shop became distributor of Nørding tobaccos in Denmark. Due to changes with Peterson and Dunhill tobaccos we are no longer distributor for those brands, but we do retail the products. This means in 2020 we are distributor of pipe tobaccos from 4th Generation, Nørding, Vauen and own brand G Flake.

Only for Non-tobacco related products
From April 2nd 2021 we comply with new Danish law that prevents us from showing pictures of tobacco products.

Online we kan only show our selection by a list and we may not describe, recommend or supply you any information you cant find on the packaging of the tobacco product.

Since we are a speciality store we are allowed to show you pipe tobaccos and cigars in the physical shop. However smokeless products, cigarettes and rolling tobacco has to be hidden away. Selection can be shown by a list and we can then find the product for you afterwards.
您似乎是来自中国的客户
您希望使用中文浏览吗？

It seems you are located in China
Do you want to change the language to Chinese?
不，谢谢
No, thanks    是的，中文
Yes, show in chinese